I debated running the Memorial Day 5K, we didn’t sign up until two days before and ultimately decided to do it because we did it last year. Much like this year, I took a break from running after the Bainbridge Half to let my body recover from the training. My body didn’t really need to recover this year, but mentally I just haven’t been there. I’ve had no desire to run at all. Last year, I ran a PR at the Memorial Day 5K and was really, really happy with my time.

This year, not so much. I forgot to turn on my watch until after we started running so my splits are messed up, but my official time was 34:22 – slowest 5K ever!  That is what happens when you don’t train! 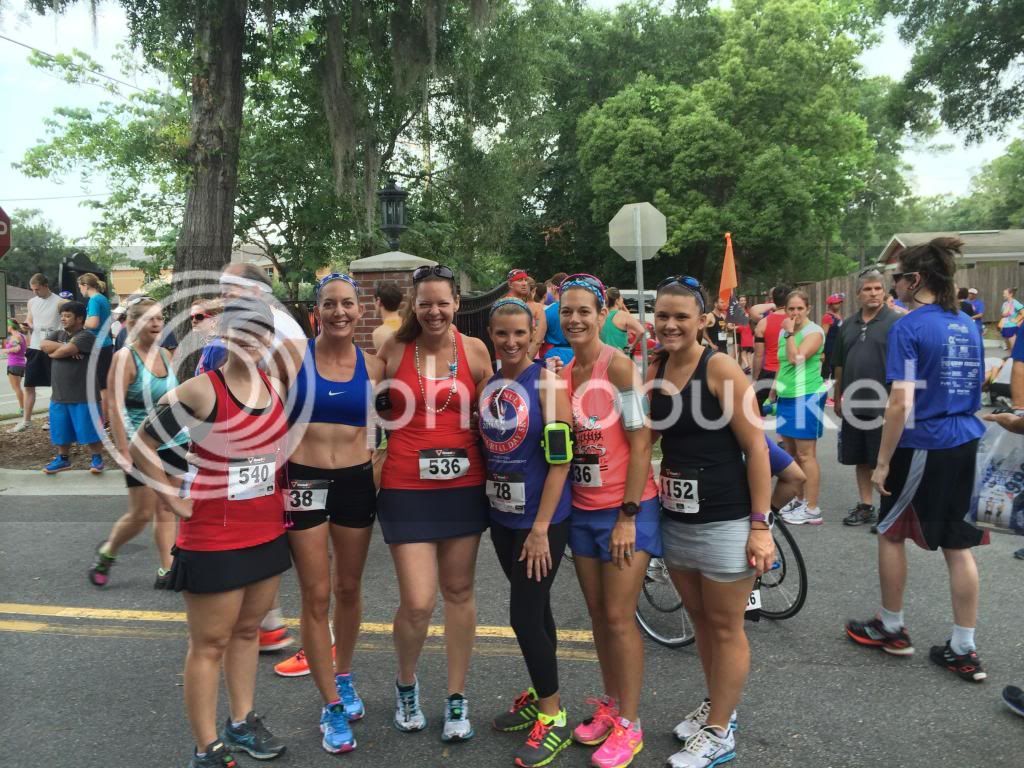 Braden wanted to run in the kids race, so before the race we met up with Jenn and her parents and dropped Braden off with them while we ran.  I went to pick up my chip and apparently they gave it to someone else, so my bib and chip didn’t match (though I’m fairly certain the time under my name is the right one, it sounds about right).  We made our way to the start line and I lined up with Adam and Carter.  I probably shouldn’t have, since they’ve both been running lately and are in good running shape.

We sang the national anthem, then I realized I forgot to turn my watch on.  Oops.  The gun went off and the guys took off.  I fidgeted with my watch for the first half mile or so, waiting for it to find the satellites, then finally gave up and ignored it.  I kept up with Adam for a while, which was probably somewhere around a 9:30 pace, then realized that was probably not so smart since it was humid and hot and I am out of shape.

I ran into Devon around mile 2 and we talked for a minute.  She told me she was shooting for a PR so I told her I was going to take a walk break – I didn’t want her wasting her breath talking to me when she had a goal to hit.  I walked for a while, then started running again with a half mile or so to go.  I’ll be honest, it was pretty humbling to struggle during a 5K.  I know the weather wasn’t the best, but I used to be able to crank them out with no problems.  Lesson learned.

Shortly after I finished, the kids race started.  Jenn and I lined up with our boys for the mile run.  It was more of a sprint/walk than a run, but we had fun and the boys loved getting their medals.  Braden was up late the night before and wasn’t feeling so hot, so I gave him a piggy back ride for the last quarter mile or so.

All in all, it was a nice morning.  It was an eye-opener for me.  Marathon training starts in a few months an I really need to work to build my base back up. Since Adam’s work schedule is a bit more flexible now, I’m hoping to start getting up in the mornings to either run or to do a yoga class at the gym.  I know once I get into the routine of doing it, it won’t be so bad, but right now it’s just so hard to make myself get up to run.