You know how last year, I ran a marathon, then six weeks later I ran another marathon, then six DAYS later I ran a half marathon?  And I said I’d never do that again?  I lied.  Okay, I didn’t really lie.  I didn’t do the whole back to back marathon thing, and I didn’t run a half either, but I did run a race just six days after running a marathon.  And you know what?  I loved it!

If you’ve never run a ZOOMA (particularly ZOOMA Florida) race and there is one anywhere near you, what are you waiting for?  I had the best time!  The ladies behind ZOOMA really know how to make their runners happy.  I left work Friday afternoon and headed out to Amelia Island to check into my room at the Ritz-Carlton.  The first thing I did was walk out on the balcony to check out the view – I was not disappointed!

I could have sat out there for the rest of the night with a good book and a bottle of wine and been perfectly content, but instead I quickly unpacked and headed down to the expo with Jenn to grab our packets.  After a chat with one of ZOOMA’s founders, Brooke, and the Feetures! rep at the expo, Mary Mac, I headed back upstairs to freshen up before the ambassadors reception hosted by Feetures! and Mary Mac.

The reception was really great – they had a great spread of fruits and veggies for us, as well as champagne.  A few of the girls couldn’t make it so it was a really small group.  It was nice to spend some time chatting with the other race ambassadors and really getting to know them.

We finished up there and walked over to the Mocktail Party hosted by us!  I’m not sure that the runners there actually knew who any of us were so that was a little bit awkward, but we had a blast anyway.  You should definitely check out the other ambassadors blogs – they were such a fun group of ladies!

After the cocktail party, some of the girls were going to grab dinner at the sports bar in the Ritz-Carlton so I tagged along and had a glass of wine (plus some of the chocolate I grabbed on the way over — yum!) and we had the most hilarious conversation.

We all called it a night fairly early since we had to be up early-ish the next morning for the race.  I am not a fan of early mornings so one thing I love about this race is you don’t have to be up at the crack of dawn since it doesn’t start ’til 8AM and it’s a smaller race.  I’m also not a huge fan of race shuttles, so I offered to drive to the starting line.  We all met in the hotel lobby at 6:50 and then piled into my car for the quick ride over to the starting line.

It was really nice to have my car there so we didn’t have to stand out in the cold!  Thankfully it was not nearly as cold as last year.  I waited until the last minute to get out of the warm car and after a quick picture made the oh-so-long 30 second trek over to the starting line.

There were no corrals and since I’m not really in the best running shape, I said a quick goodbye to the other ambassadors and lined up close to the back.  We took off and I realized that I had no clue how many miles are in a 12k (it’s 7.5ish) so I started doing the math in my head to figure it out.  I’m not so good at math when I’m running! 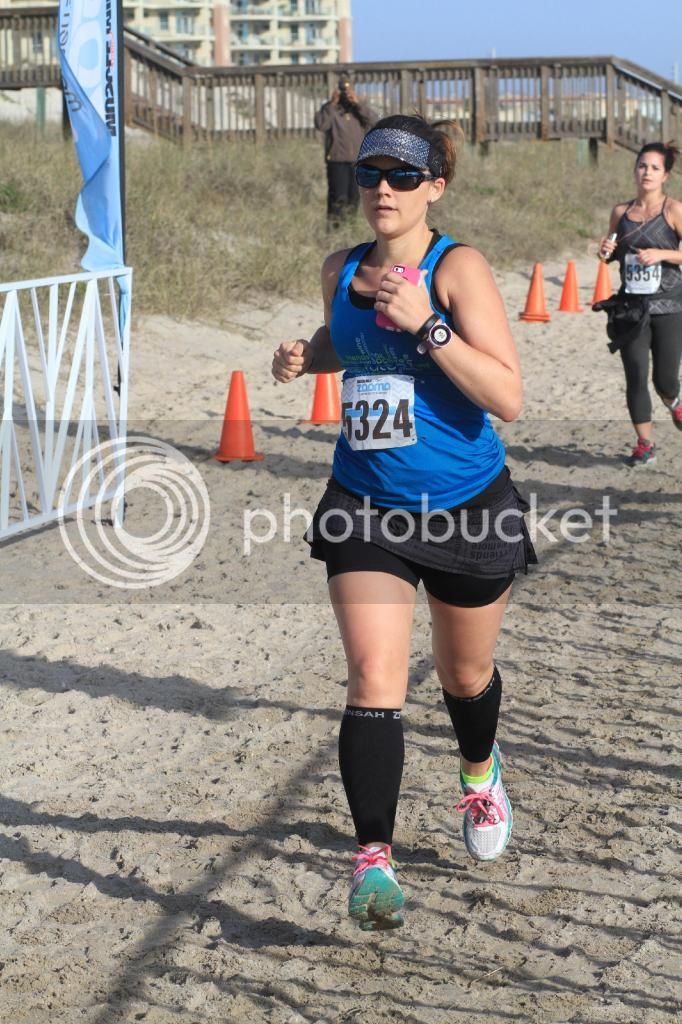 The miles ticked off pretty quickly – I stuck to my 4:1 intervals and enjoyed chatting with a lot of the other runners along the way.  I ran for a mile or so with Devon before I needed to stop for water.

There was also a super sweet lady in a Superman shirt who was my own personal super hero that day.  I’d guess somewhere around the 5-mile marker, there was a family out in their driveway.  They had a little girl around Mackenzie’s age that was smiling and waving to all of us running by, so I slowed down to say hello and wave to her.  Apparently I also ran out into the road a bit when I did it.. oops!  (The course isn’t closed to traffic, but there were cones marking it and cops patrolling.)  Thankfully she got my attention and pulled me back  before this huge truck zipped by just a few inches from me.  Yikes.

One thing I remembered not loving last year was the finish.  It was a common complaint and the ZOOMA ladies tried their best to fix it this year.  Instead of running down through the dunes like we did last year, we ran across the dunes, ran a bit on the packed sand, then crossed back over the dunes to the finish line.  It was SO much nicer!

The only way I think it could be better is if we finished on the packed sand instead of having to cross back over the dunes again.  Look at this finish line though — it’s really hard to find anything bad to say about it.  It’s gorgeous and the weather was perfect.

After I finished, I grabbed a bottle of water and a banana and walked up to the after party.  This is probably the best part of ZOOMA races.  There was a really great live band, massages, snack boxes with REAL food (veggie subs, chips, cookies!), and all the Barefoot wine or champagne you can drink!

It’s possible that we enjoyed a few glasses..

We enjoyed the after party and watched the award ceremony.  I ran into my running buddy Jade and it was nice catching up with her for a bit since we haven’t been able to run together for a while.  (If you’re reading this — soon!!  I need to catch up to you!)

Once the party started winding down, I ran upstairs to pack up and get changed to grab lunch at Tasty’s with Jenn and here mom.  I am in love with their sweet potato fries and need to convince Adam to make the drive over to Amelia Island soon so he can try their burgers and fries too!

Overall, ZOOMA Florida was a wonderful race weekend and one I definitely want to do again next year!  It’s hard to top a race with so many of the little details that female runners love — beautiful course, great after party, amazing swag bags, free race photos!  Hopefully some of the ambassadors will be back again and I can convince some of my girlfriends to run it too!  If you want to see the details of my race, you can do that on Strava.

Disclosure:  This is a sponsored post.  As a race ambassador, ZOOMA provided me with a free entry into the 12K, along with freebies from the race sponsors.  I paid for everything else related to the race though and as always, the opinions are 100% my own.